Our Reading Streets selection this week was Scarcity. It wasn’t one of my favs. But I found a few reader’s theaters to help explain scarcity A reader’s theater for Old Mother Hubbard is fun and explains scarcity really well. It can be found HERE at Very Short Mother Goose Tales.

There is only a week till Halloween so these books were fun to add to our Scarcity line-up. And we read all as a reader’s theater. Every day was a new one. Kids love and get into reading with expression and since I have one table of kids read a part they try to outdo each other’s tables groups. It’s funny.

Here at Learning to Give has a good diagram to show what we have to do when things get scarce in anybody’s life. We will discuss when kids can donate things they have outgrown to thrift stores so people in need can go buy them for not a lot of money. They can also give away if they have extra things or money. 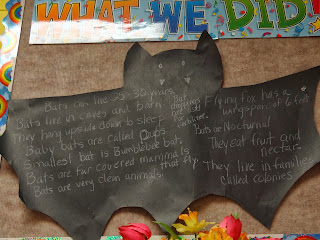 Many of the kids told how they pass down clothes to friends or cousins. We talked about times we had to do without when mom or dad were out of money or times we had to choose when we only had a certain amount of money and wanted more than we could buy. Or times when we felt lonely when friends were scarce (like Stellaluna).

I decided to keep with our writing non-fiction reports and chose to do them on Bats as a springboard from Stellaluna (since Halloween is around the corner). We started with a FACTUAL ACROSTIC POEM ON BATS.  I made a list of facts on the board as we read 2 Scholastic News Magazines on Bats and 2 non-fiction books. 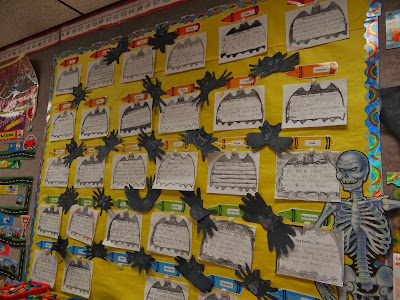 Then we brainstormed facts we heard and wrote them down on sloppy copy paper. Then we came up with beginning words for sentences starting with B, A, T, and S.  They were quicker than I thought! HERE at First Grade Parade are some really cute ABC Order bat activities as a free download. Thanks 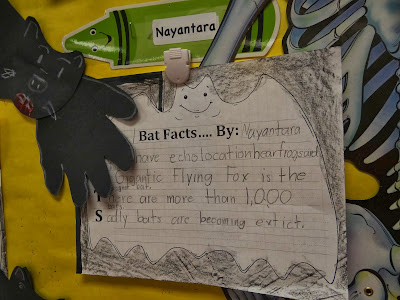 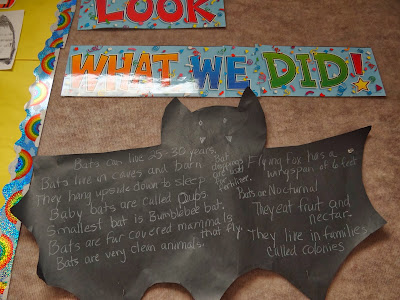 The next day we added reports on the back of our acrostic BATS paper after reading 2 more non-fiction books and Stellaluna. By this time the kids heard repeats of many of the facts so had internalized a lot of them. Did you know the smallest bat is the Bumblebee bat and it is smaller than your pinkie finger? So cute! (well, not if it landed in my hair!). EEK! 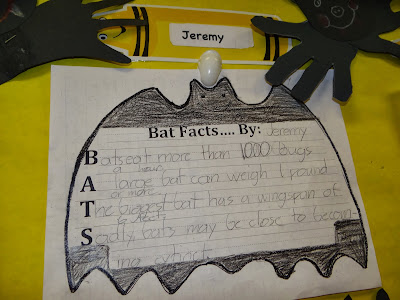 Here  is a comprehension test that goes well with the Scarcity story describing what Scarcity means HERE at Social Studies for Kids.  A review of the Scarcity story that was great I found Here at Mrs. Volak’s Class. HERE are more of her activities.

We finished our BAT acrostics and BAT reports. And lookie at our cute little hand tracing BATS we made during ART!  I guess these are vampire bats noting all the red blood the boys colored on these poor little bat teeth, lol.

Summer is coming! We only have 4 more days of school! Do I sound excited? Well we have had such a busy week I’m kind of tired. But the kids have tons of energy still! We may have to play a game of kickball tomorrow with the other 2nd grades!

Here are a few shots of our cute Fairy Tale Plays we did this week for the 1st, 2nd and 3rd grades. I really enjoyed them. The kids got to be such great actors and had super expression! I think most of the parents enjoyed coming to see them too.

We sang some silly songs in between the songs, about ladybugs and “Old Dan Tucker who came to town riding a billy goat, feeding a hound, washed his face in a frying pan, combed his hair with a wagon wheel and died with a toothpick in his heel”…..you get the nutty drift.

I CANNOT believe that school is out in less than 3 weeks now! I’m sad and excited at the same time! I guess it could also be that I feel like I”m living in Seattle, Washington with ALL THIS RAIN! I cannot believe it even snowed this week! It’s almost the end of May for heck’s sake!

Anyway, I”m on a reader’s theater kick. We did Jack and the Beanstalk last week LINK HERE and this week we are doing The Little Red Hen.  I found a cute script for it online at HERE at Joanne’s wikispace. and then I found some puppets for the story and made copies and blew them up for each student to do a set of 4.

Afterwards I realized the animals don’t match to the reader’s theater. So I just used a white out pen and changed out the characters of the  pig and duck  to the mouse and cat throughout the story on my copy of the reader’s theater.  Then I made copies for all the kids to read it too. They LOVED reading and acting out the parts. I gave each table a character to read chorally.

Some other readers theaters can be found at the Grandview Library. Some of them are illustrated. The link is HERE for Reader’s Theaters.

They made puppets by coloring them and cutting them out. Then we taped popsicle sticks to the backs. While they were doing their puppets I read them a VERSION of the little red hen in rhyme. It is called The Little Red Hen (Makes a Pizza)  It is a funny story where she is actually making a pizza and all the animals are doing funny things like listening to boom boxes and laying out by the pool on a chaise lounge.  We will compare and contrast the stories when we are done with both the reader’s theater version and the book version. I had no idea there were so many out there!!

My kids are really good at using expression and getting into doing character voices. It’s such a cute story. And as we were getting into the readers theater  I thought about how fun it would have been to bring in some homemade bread dough and have the cafeteria ladies bake it for us! Super FUN! (too bad I didn’t think of it sooner! duh!)

This story reminds us all to jump into things and be assertive, even when others around us are not helpful.  We can be independent thinkers, movers, shakers, just like the RED HEN!  I think we will do this for next week’s art and drama rotation!I think the other first graders will love it too.

We painted paper plates red and added white sticker eyes, a yellow beak, wings and a feather on top. The legs are drinking straws and we added little hen feet to the bendy part of the straws. They turned out ridiculous looking but funny. pick a peck a….cheep cheep cheep!

Instead of doing a retell I gave the kids this assignment; REWRITE the Little Red Hen in some way. Change the food she was making, make one of the characters come and help her, or finish the story in a little different way. We had the hen making spagetti, cinnamon rolls, chocolate chip cookies and meatball pizza. These stories are going to be hilarious. Much more fun than a simple retell…

Next  we’ll do the Stinky Cheese Man!   It’s actually my favorite. The story….not stinky cheese…hehe