My kids have been having trouble distinguishing between “or” and “ar” sounds in their writing and mixing them up. I’ve done all the reminding, rewriting the correct spellings on their sloppy copies during writing workshop AND giving or and ar words on spelling lists. But that hasn’t done the trick!  Now I’m taking another approach.  I’m using a couple of ART PROJECTS to teach  phonics and help us remember how to write AR and OR sounding words! 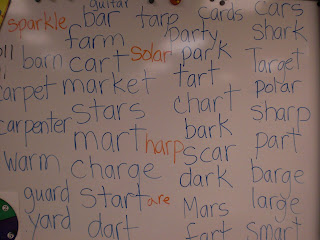 So this week we did 2 fun activities. First we made a brainstorm list on the board of all the “ar” words we could think of. They had to be words where we distinctly heard the R say it’s own name.  We came up with over 45 words! Then I gave the kids each a “star” cutout and had them choose as many words to write on both sides as they had time in about 6 minutes. They wrote words  on their star using both sides. Then we taped a straw on one side. And then came the fun part.

We walked around the room with our stars and found partners. I read you a word off of MY list, and you have to try and spell that word. Then you ask me a word (looking at your star) from YOUR list and I have to try and spell that word.  We help each other if we get a letter wrong. Then we move around to find a new partner.  It was a lot of fun playing the spell a star word game.

Next we had to do something for OR words. I  had seen a creative idea from a blogger who had used Let’s Get Poppin’  a cute unit by Babbling Abby  Link HERE.   So we made some popcorn tubs and had a contest to see who could come up with the most “OR” words. The contest was a GREAT MOTIVATOR!

This was a fun  phonics/spelling activity using the OR chunk. I gave the kids 4 minutes to come up with as many words as they could think of. Then I called on each child with more than 10 words to call out and I added the words to the board. Andrew had the most with 16.  Great Job!

Then we wrote them all on popcorn shaped papers I had cut out the day before and made a cute popcorn bucket that looks like it came from a movie theatre.  It is a red rectangle with yellow stripes. I typed up the “popcorn Words” and they glued it on the fronts of their buckets.

Now all we need is some a good movie and some butter for our popcorn!