Check out our cute penguin art and acrostic poems. 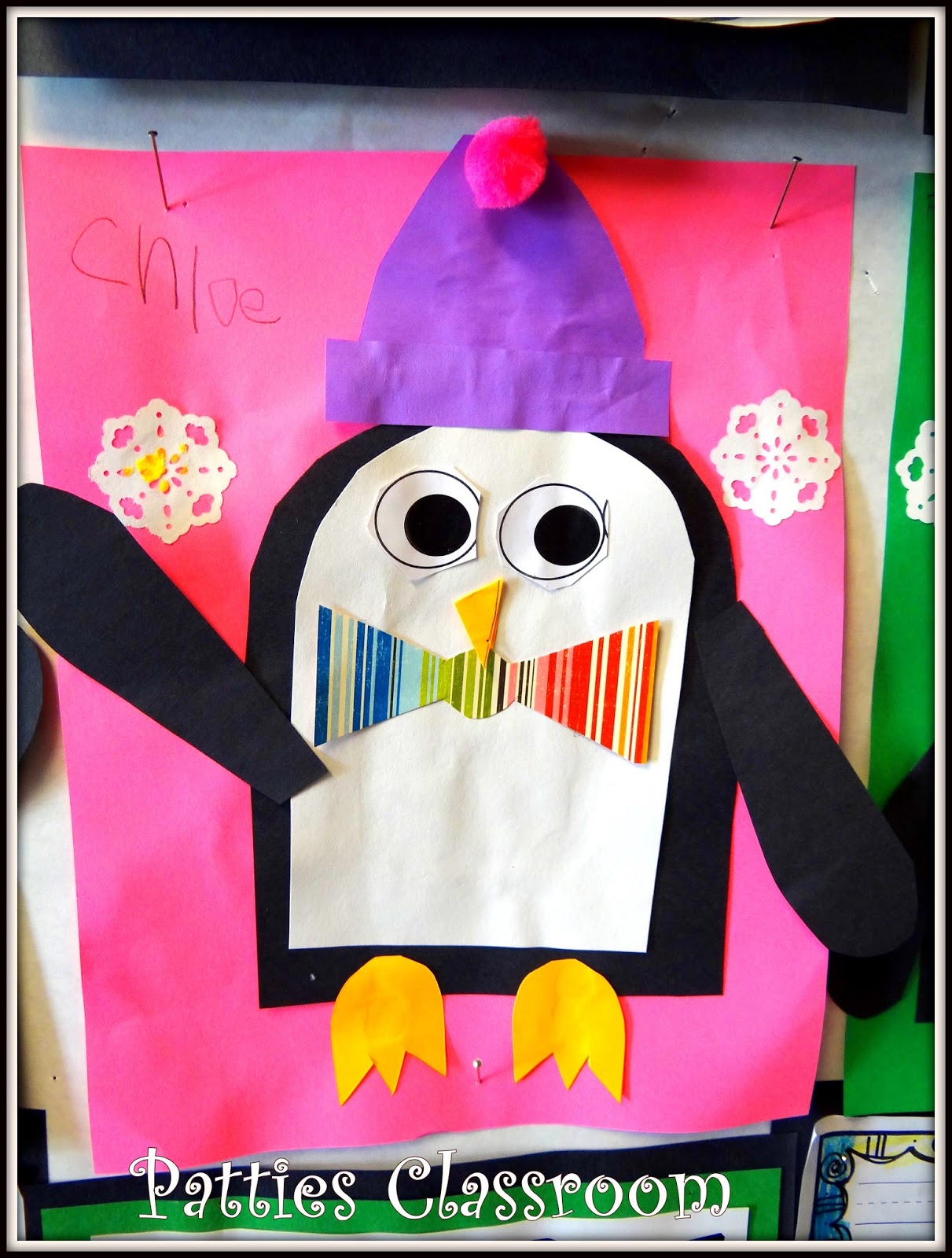 Last week We learned about Macaroni Penguins, Emperor Penguins, and Chinstrap Penguins. And then we read lots of penguin books and stories. I got the information I read the kids from this freebie at TPT.  It also had a wordsearch and a cute dot to dot and some vocabulary cards we cut and used. 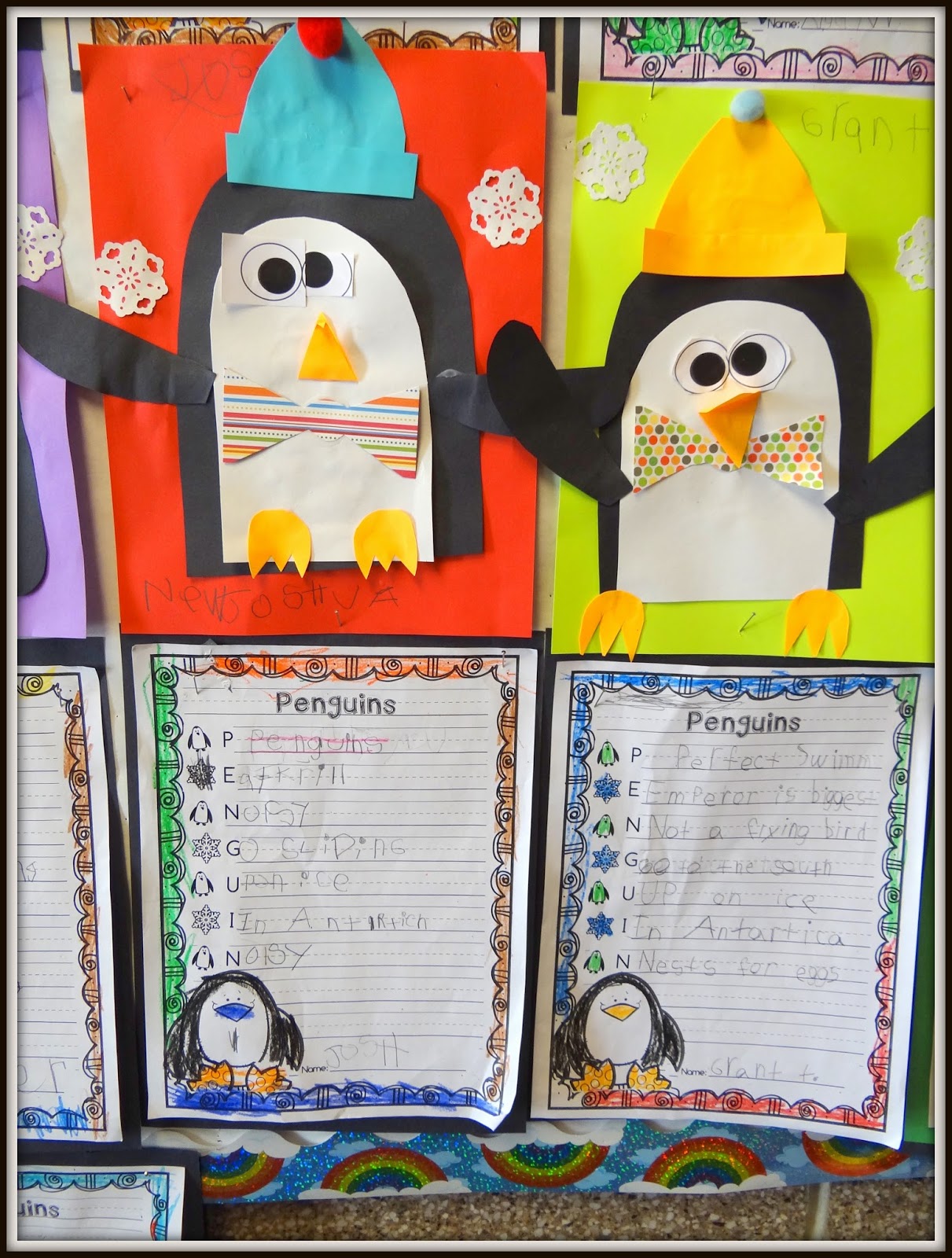 Then I had the kids brainstorm words that began with PENGUIN. And we wrote them in a big list across the whiteboard. Some of the kids came up with phrases such as “up on an iceberg” or “noisy birds” or “not at the North Pole”. 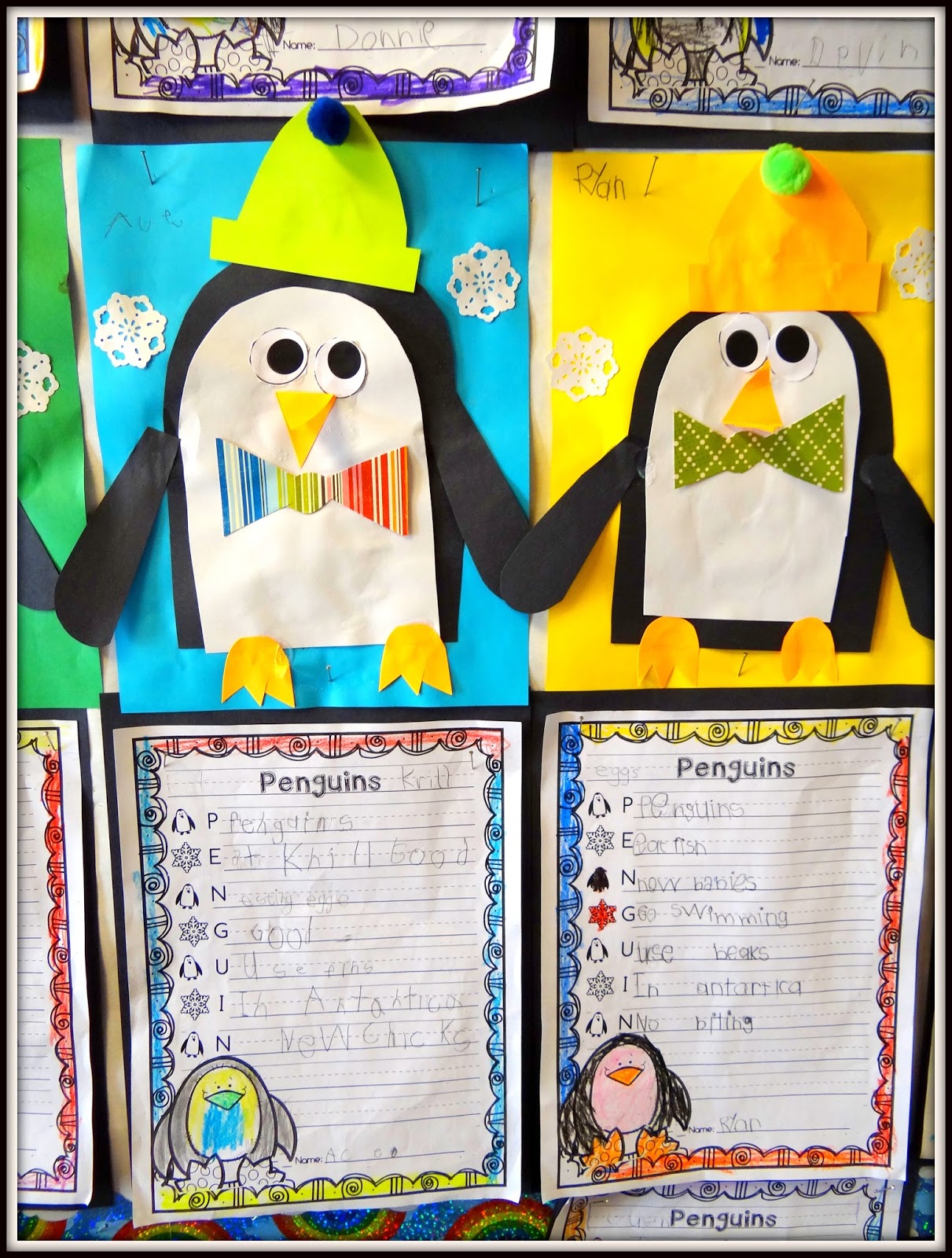 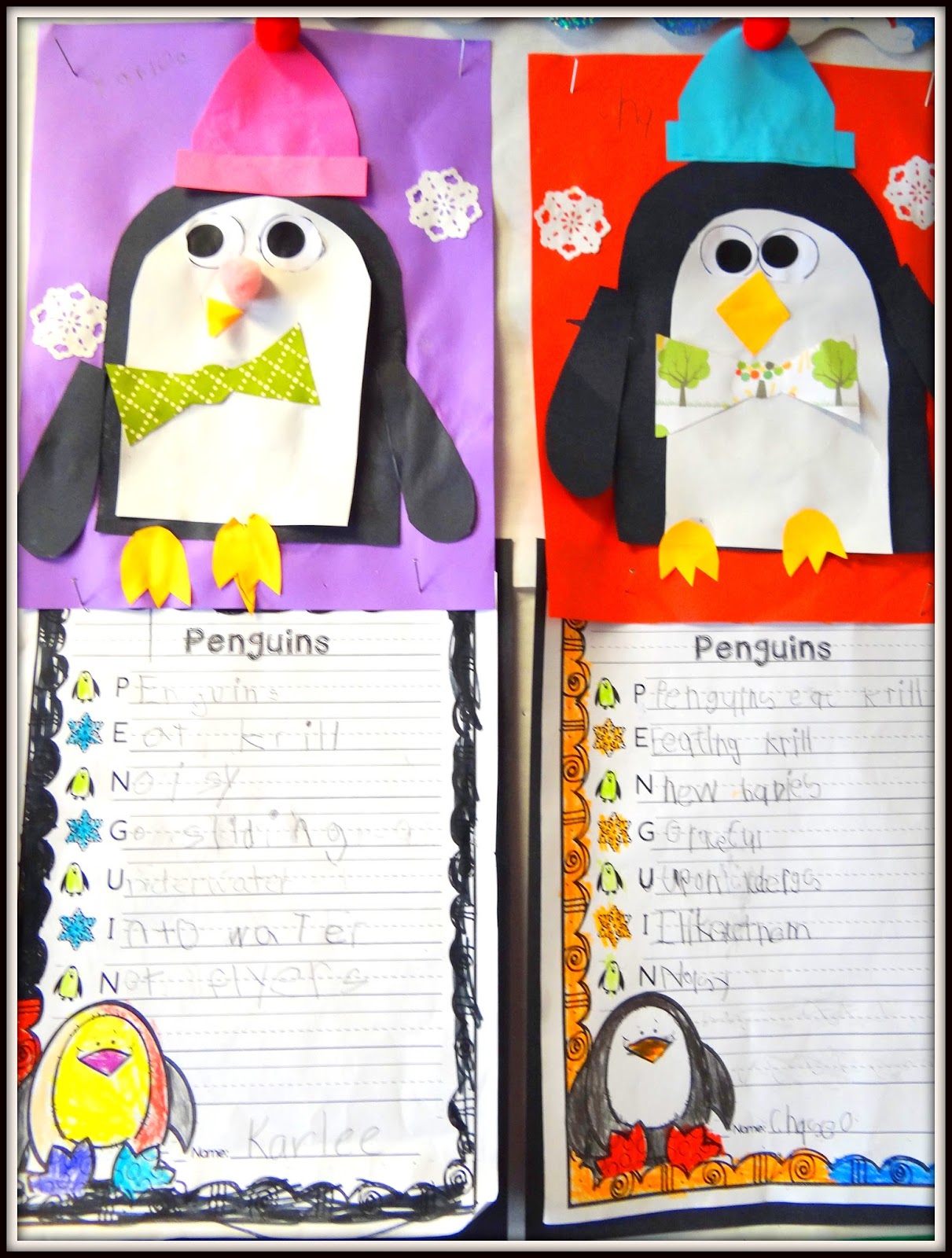 Then we wrote our own Penguin Acrostic poems on this cute paper I found and added the PENGUIN to. I love how they turned out.

I also read the class my favorite Children’s book; Tacky the Penguin. He is an odd bird that is not accepted in his group, but he ends up saving the other penguins from Hunters. He saves the day. And everybody loves him after that. Kind of like the Rudolph the Red Nosed Reindeer story. He saved the day too!

ANYHOO, we had to make some cute Penguins to go with our little Penguin Acrostic Poetry. Here is what I came up with. The kids are not really great at cutting yet, but I think they did a fabulous job. These little eyeballs were very tricky too!  I made a bunch of bow ties like Tacky the Penguin wears, using some scrapbook paper scraps I had at home. When they were done we did a cute wordsearch. 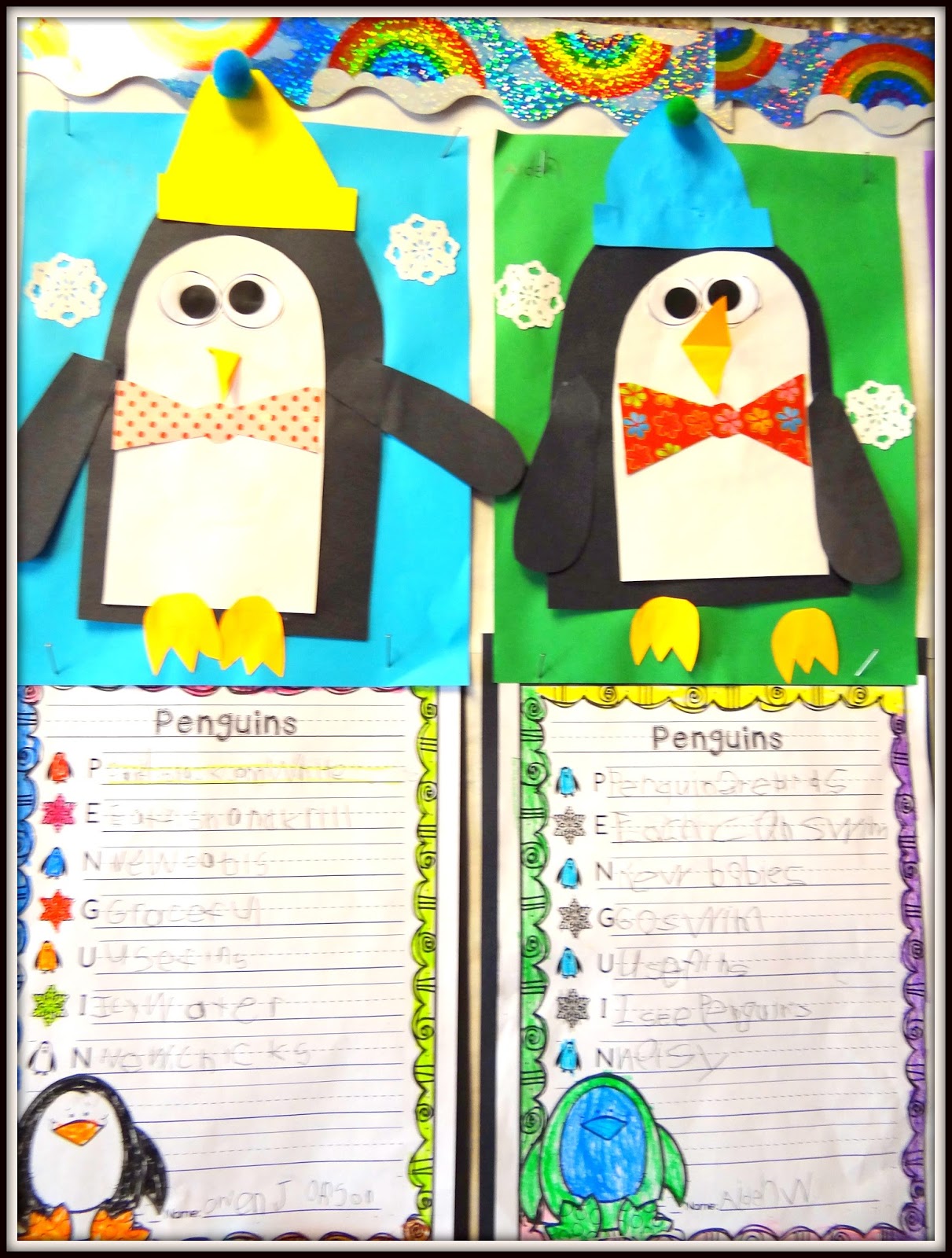 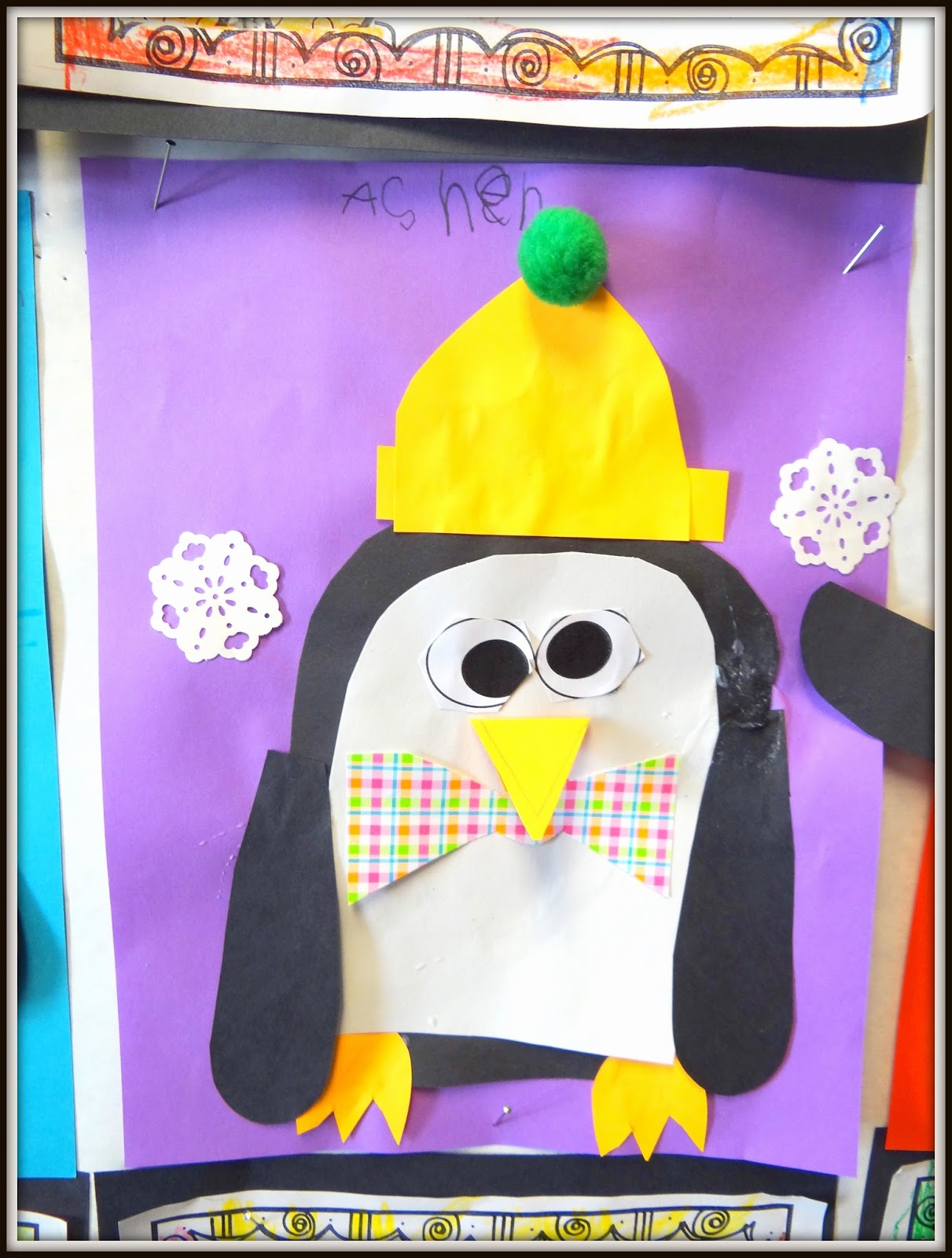 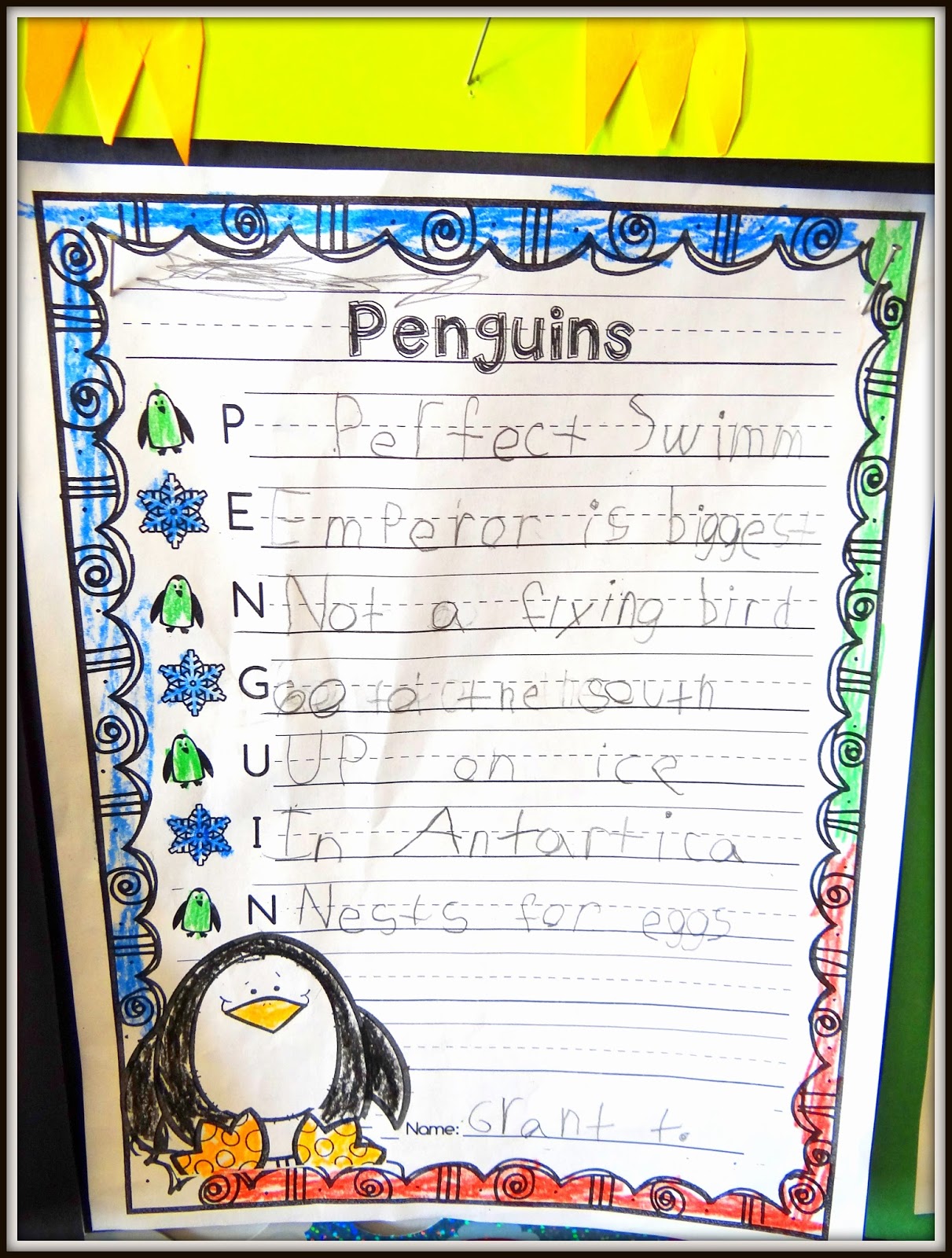 Then they chose little ski caps from scrapbook and colored paper and topped them with some fuzzy balls. The eyeballs I got on TPT in a kit of freebies on the Penguin theme. Check them out  HERE.  I had them do this addition and subtraction page using the cute counters I have on every desk. We have lots of fun with the cute variety of math mats and math counters I’ve put together. Check some of them out HERE. And we did this for a center during Penguins Day. It is a cute math matching activity. HERE.

I used this stencil of a penguin to cut out the black body, the white belly and the arms (sort of). I actually used this one and then made a slimmer version, and then a short version. Then the kids weren’t all exactly alike. They just chose the two they liked and put them together and glued them down on pretty brights papers. I used blue, green, purple, pink, orange and red and yellow backgrounds. 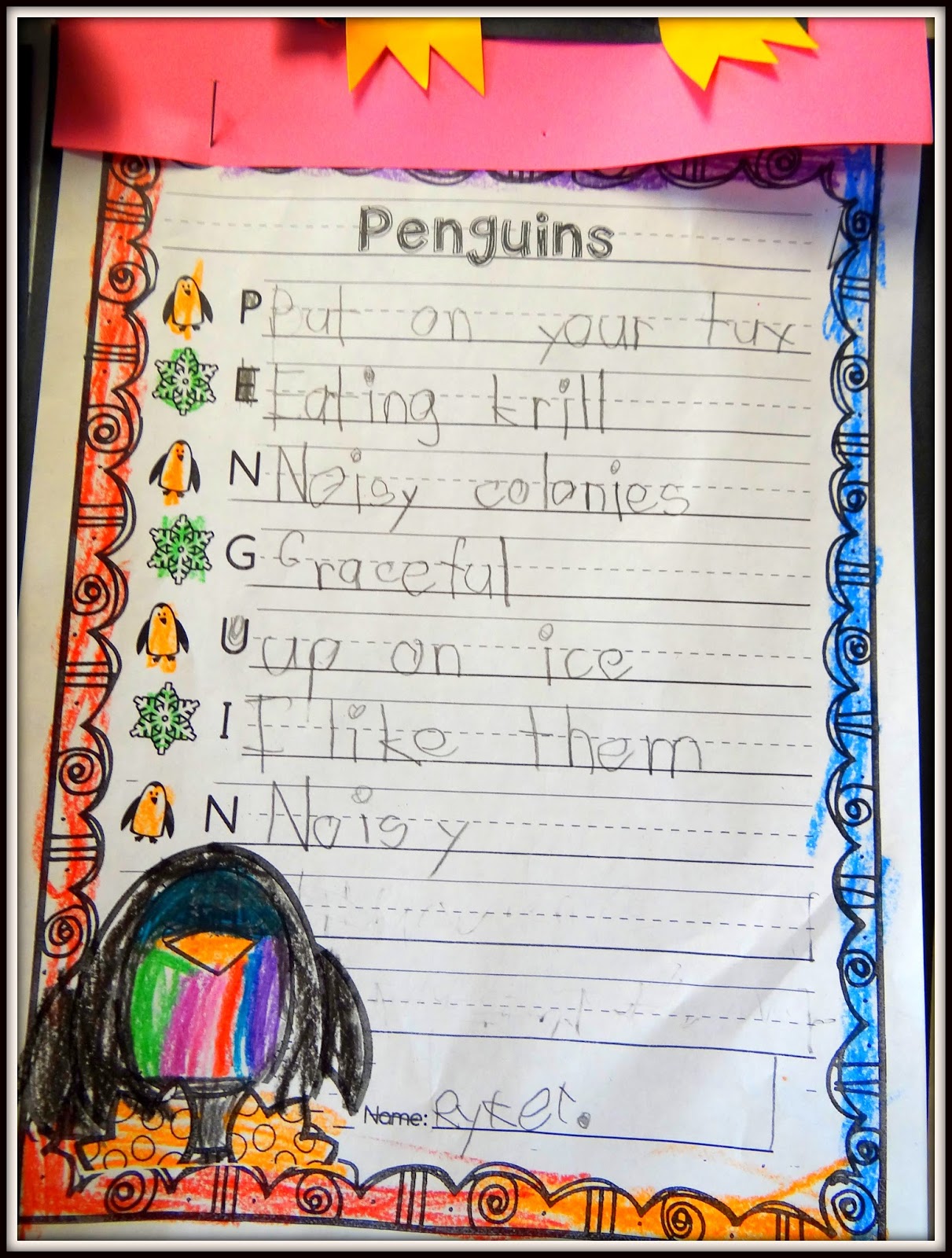 Then we put on these cute eyeballs after cutting them out. I think this was the hardest part for the kiddos. Many an eyeball got cut to pieces before all 23 of them had a good pair. haha. They added their flippers in any sort of way. Some are flipping theirs up high like their penguin is waving. So cute! 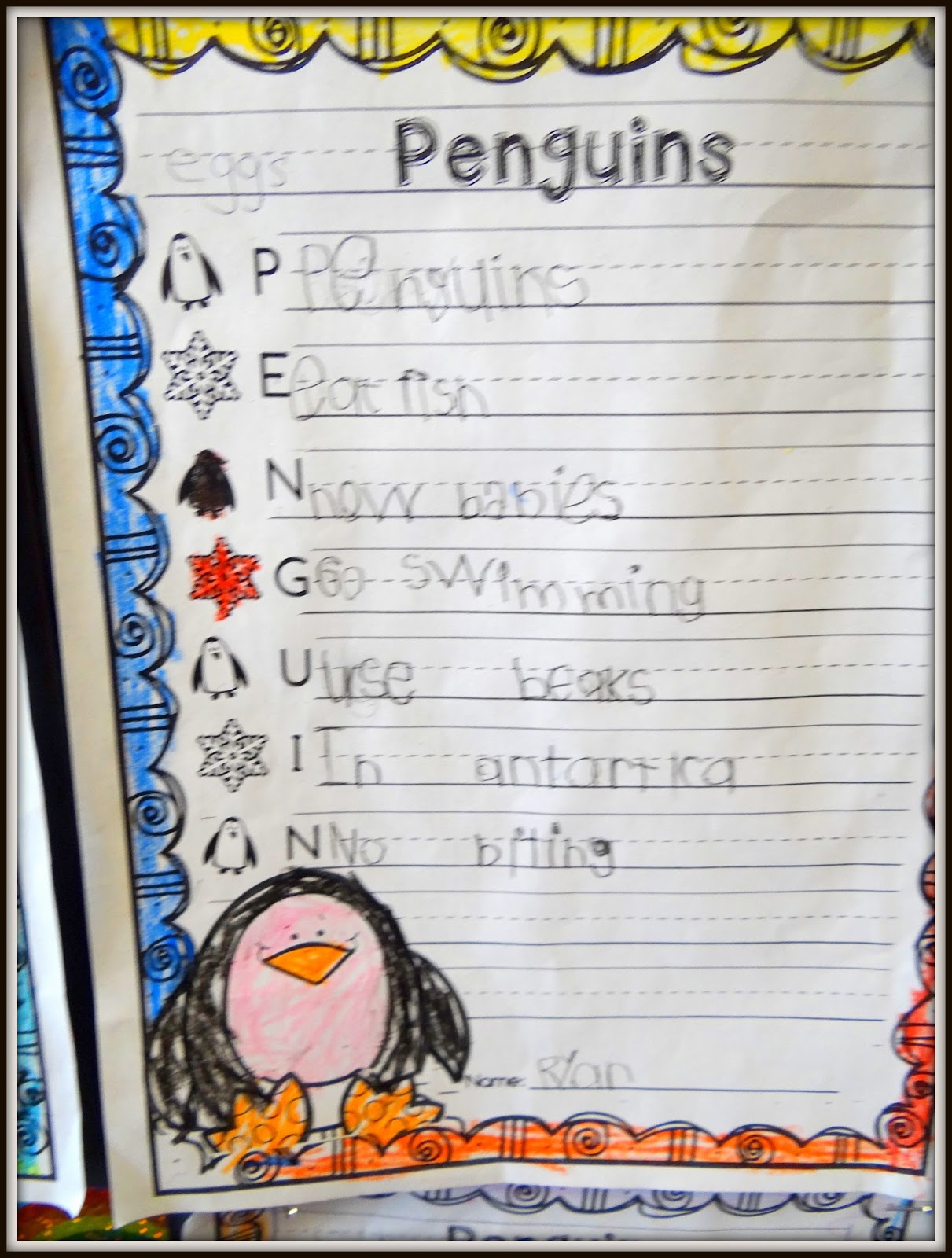 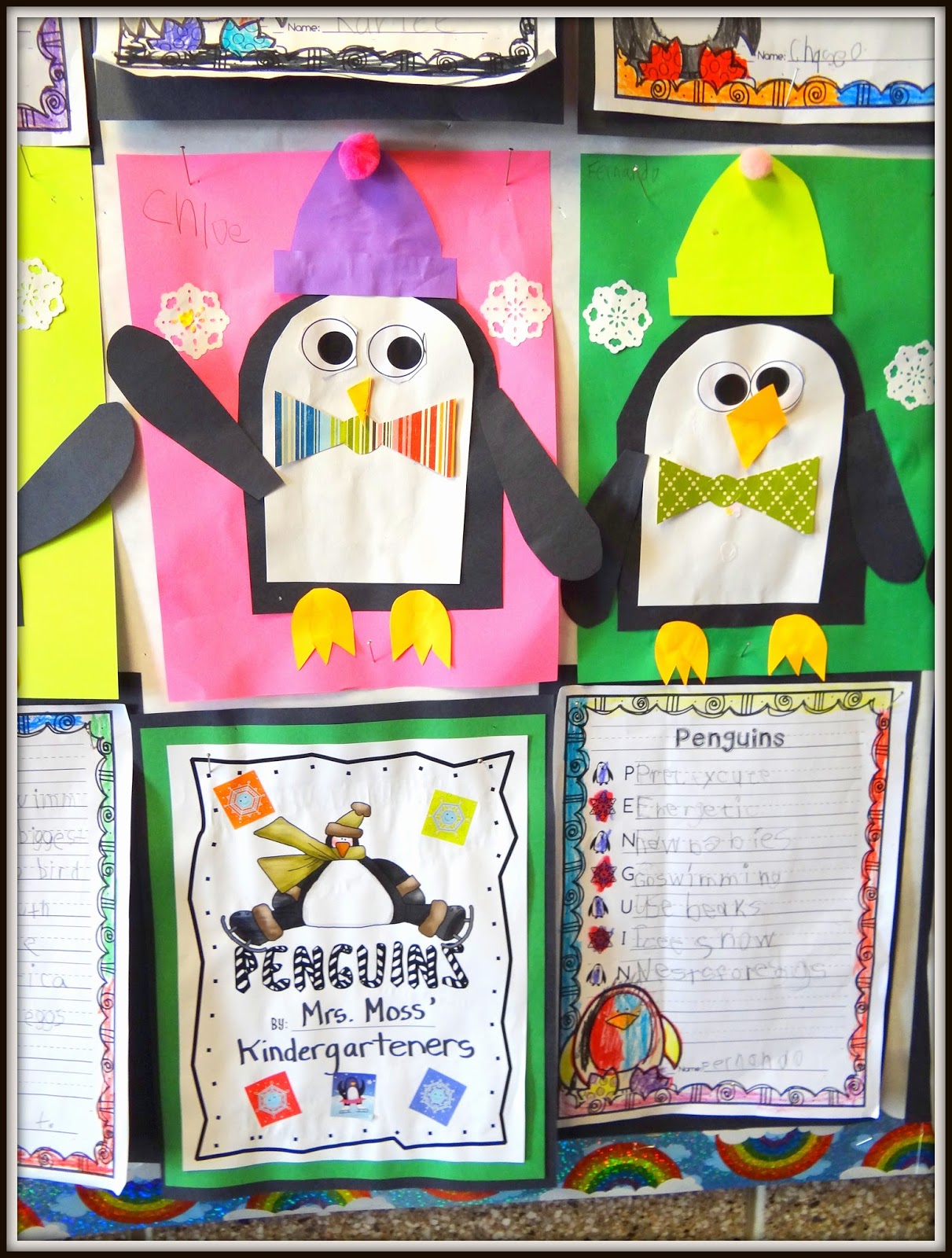 If you have older students, I have read the play as a choral read together when I taught 1st and 2nd grade. Most of the kids can read the words by now. The Grandview Library has a freebie copy of the play HERE.

Then we made our own beaks folding a piece of orange bright paper and cutting out a triangle. This way it looks 3D like the penguins are quacking. Then I cut out a bunch of sets of feet and everybody chose ones they liked. Another grade could probably cut their own out but we wanted to save some time. Then they added the hats and bow ties. The hats I just freehand cut, and then they glued down a band over the top with the corresponding color, and we all chose a fuzzy ball to glue on top of the sweater hats.

Lastly I punched out some little snowflakes and they glued 2 down wherever they wanted.  Here these little men are! I love them so much!