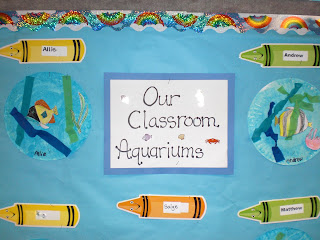 In my classroom we have 2 types of living things to view in their natural habitat. One is a frog aquarium. We have 2 male frogs and 1 female frog (that both males fight over!)
One male has actually had his whole hand bitten off,  little by little, by the mean, and bigger, Alpha-male frog. I think this is the handless one in picture. 🙁

The other living habitat is our blue-gel ant farm.  The ants are doing well in our classroom. My husband just found some field ants in a park near our home and they are doing just swell making tunnels and working together. I wonder if they don’t need a queen ant eventually though. We’ve only got a week of school left so they should last that long at least. We put a wet cotton ball in the farm in case they need more moisture. 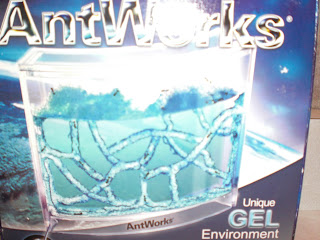 We made a third kind of habitat for art on Friday. We painted fish aquariums. We chose between goldfish, Nemo clown fish, and several others.  I drew the fish by hand using pictures from a poster I have, and I added some seaweed and coral sketches. Then we colored them and cut them out.  We painted white paper plates aqua blue for the water and added some strips of crepe paper to represent waves and motion.

﻿ BOOKS:
1. Ten Little Fish by Audrey Wood. This is SUCH a cute book and story. I bought it as soon as I saw it!
2. Commotion in the Ocean by Andrease Giles – Here is another beautiful book in rhyme. My kids love it.
3. Rainbow Fish Finds His Way by Marcus Pfister – One of the special books in my library. Pfister always gives a great message to kids in his books. Rainbow fish ignores warnings of others and gets lost.
4. Over in the Ocean by Marianne Berkes Another beautiful book filled with sea life.

They turned out really pretty. Too bad we didn’t have any crushed rock used in aquariums. I might try to find some at Walmart this weekend. That would add a lot.  I got the idea from a post by First Pallette and it’s a post called 3D Goldfish Bowl.

It would look even a lot brighter with the crushed aquarium rocks in the bottom.  Next time we’ll add that for sure. It was a really easy, and fun art project. The kids have already named their fishies!  Maybe a fish story is next. …glub glub…..