This weekend John had his favorite bike race up in Garden City; The Bear Lake Classic! It is a 51 mile bike race around Bear Lake up near Logan Utah.  I love to go with him since we bought our cabin up there 2 years ago because I get to hang out on the deck and watch the bikers come down near our house as the finish line is about a 1/2 mile away. 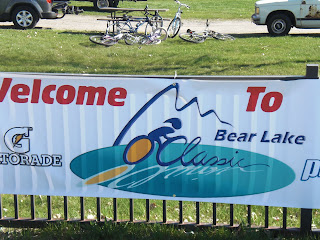 Last year John was on the Cafe Rio Team. This year he decided to be a loner, I guess. Here he is just before we parked the truck to go get his number for the race.  He had to play Dire Straits on the CD player before he got out of the car. “Mood Music” Or maybe just “getting pumped up music”. It was pretty cute. I’ve never been an athlete so I don’t get that part I guess. I was just an interested bystander.

He’s making fun of me cuz I don’t know how to work a video camera. :O The next video they are about the 9th group to go out. There must have been 250 bikers in the whole race. I even saw kids in the race.

He finished the race in about 2 3/4 hours. He did better than last year. I stayed in the cabin and watched a movie and read some magazines. Then when he came back he took a hot bath and we ate lunch. Then we had to get down to Heber for my good friend Heidi’s wedding reception. We passed through the thriving metropolis of Randolph, Utah. Look at this “Smallest Store in Utah” pic I took. So funny! 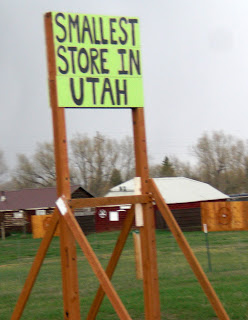 We passed by some sheep, cows and antelope. I tried to snap pictures while we were going 60 mph. That doesn’t work too well as it turns out!

﻿ We have not so fond memories of Randolph, Utah.  John got a ticket last summer when our boat died in the middle of Bear Lake and the rangers towed us in. Did you know you needed oars and a whistle on a boat? Oh yes, AND a fire extinguisher? Yeah we didn’t either. We got a ticket! That was nice of those rangers.  So you can’t just pay the ticket. You HAVE to go appear before the judge! So I had a Monday furlough day off the day John had to appear so I went along to watch the fun.

Jeez you wouldn’t believe it unless you’d been there. It was like that show Night Court! The judge had cowboy boots and a flannel shirt on! I said kinda loudly “THAT’S the judge?” and John elbowed me in the ribs. hehe  But they had bailiffs, a bouncer cop, lawyers for the county, clerk of the court, the whole 9 yards. Then they read every little offense you made in front of like 50 kids sitting in this miniscule courtroom that had all been busted for drinking (underage) on the beach It was crazy! Then dramatically, the judge says that all these offenses (including no insurance on the boat, who knew you needed insurance? NOT us obviously) they all added up to $400 bucks fine. WTH!

John in his good natured way told the story of he and I packing a nice picnic and then getting stranded in the middle of Bear Lake on our boat. And finally calling a ranger and giving him our GPS address, he  towed us in and gave us a  ticket. So everybody laughed in the whole courtroom! Even the judge was caught laughing.

John was sitting next to a guy in a blue jumpsuit who was handcuffed.  He almost asked him, “what crime did you commit?” It is only funny now. At the time it was very quiet and serious in the courtroom. Anyway, the judge read off that John had purchased insurance that very morning, like an hour before we met in court, he read off the exact time and just looked at him. I felt pretty sorry for him at that moment. I slid a little lower in my seat at the back. He saw from the fax our insurance agent had sent to the courthouse!
﻿

That started another loud guffaw of laughter in the courtroom. By then all the clerks and cops were laughing too It was kind of a slap in the face to the “system”. I was wondering if this was daily fare for the court people. But the judge started chuckling too after John just smiled and admitted it all. Then the judge gave John some fierce advice about oars and whistles and he knocked the charge down to a $100 fine. It was a total embarrasment to us as we both slinked out of that courtroom. The strong arm of the law and all that.

Anyway we were on our way through all these small towns and it started really raining hard with lightening and thunder. We were almost to Evanston and I saw this cute little windmill advertising in a little old farmer’s yard. There were big windmills and cute tiny ones.  I’d like to get one of those for my cabin…very cute! 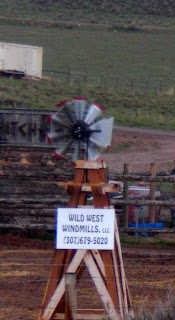 We stopped for a snack at McDonalds and returned our Redbox movie too. Did you know you could return Red box movies even interstate? We rented it in Utah and returned it in Wyoming!

We went past Echo Reservoir and I remembered having our whole family together there the first time we took out our jet skiis. All the boys could get up on the older ones where you have to get to your knees first and then try to stand. Those were fun times. Good memories.

We finally got to Park City and turned off to go through to the small valley of Heber, Utah.
﻿

﻿ I wrapped up a pretty wrought iron and glass beverage dispenser and we went to the reception. It was in this million dollar vacation home in Heber. It had the most beautiful view which I forgot to take a picture of. We met up with lots of friends and had a great time. The bride and groom looked so happy together.

Eric Olson and Layne Halverson kept us in stitches telling stories (both are business owners) of finding skunks, racoons, and bats in other people’s homes and how they went about getting rid of them, or working with them. Too funny!

All in all it was a very fun weekend spent doing stuff we love with good friends and yummy food. Life is good.