It seems like every time I read the paper the news is more and more devastating. The natural disasters we’ve had this year are awful and incredible.  From earthquakes (see a previous post) to tsunamis, and now tornadoes it seems like the end of days with all the bad news I read in the paper every day. 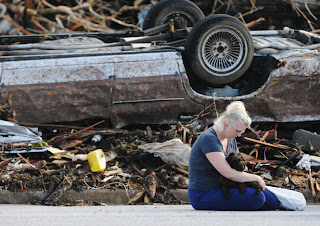 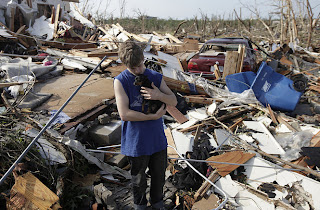 This past week we had terrible tornadoes in Missouri. The pictures are very sobering. I think about how hard that would be to lose your home and all your possessions, maybe even a family member. One woman I read about had several children and they didn’t have much warning of the impending tornado. So she grabbed them all and ran to lay down in the bathtub. Her toddler was torn from her arms as the tornado ripped off her roof and covered her and her kids in debris. 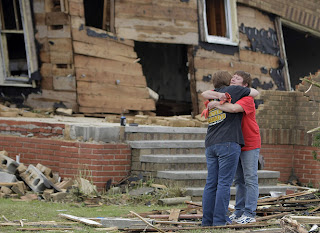 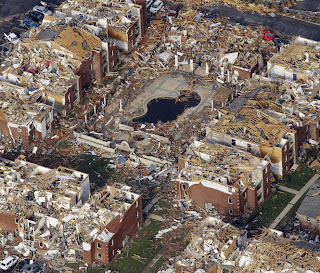 Now how would you ever hope to recover or even to deal with something that awful? I don’t know if I could.  As a mother, I would probably be in a strait jacket. 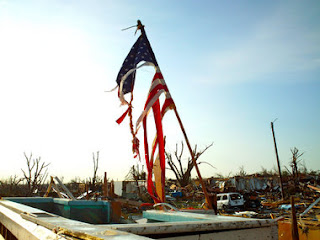 Then I open the newspaper and there has been another suicide bomber in Pakistan. The Arab/Israel problems and battles and bombings are escalating.  I don’t see an end to this fighting in the middle East ever again at this point.

There are several big news trials about young girls killing their little babies; one supposedly suffocating her own child with duct tape over her mouth and nose, the other putting her child in a microwave. How could girls become this bad?

And finally all the high profile husbands that have seriously betrayed their highly admired wives. Some of the hurt and pain they cause their families’ is unbelievable. I try to imagine that kind of betrayal and the pain it would cause me. And I think again to myself. “I would not recover from that pain. I would turn inward and start to crumble apart.” You’d find me huddled in a corner weeping.

And I think to myself; what in the world is happening to us as a people? . Why are we all being so evil? And are we being punished with all this natural disaster? 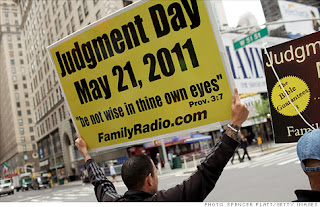 Last week there was an old, 89 year old civil engineer named Camping who decided that the end of the world was coming. The headlines said “For some, it’s Judgment Day. For others, it’s Party Time.” To me that is good versus evil in a little microcosm.

A loosely organized Christian movement had spread the word around the globe that Jesus Christ will return to earth on Saturday to gather the faithful into heaven. I wasn’t really focused on this story  until my husband read about a guy who decided to milk the opportunity to take advantage of  people who were believers. 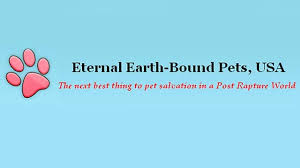 The paper tells of “Bart Centre, an atheist from New Hampshire, who started a get rich quick business called “Eternal Earth-bound Pets”. He offers Rapture believers an insurance policy for those furry pets that won’t join them in heaven: 10-year pet care contracts, with Centre and his network of fellow non-believers taking responsibility for the animals after the Rapture. The fee — payable in advance, of course, is $135 since Camping’s prediction”.  How bad is that? Well it got worse..
.

A Facebook page opened up entitled “Post Rapture Looting” offers the party invitation: “When everyone is gone and god’s not looking, we need to pick up some sweet stereo equipment and maybe some new furniture for the mansion we’re going to squat in.” By Wednesday afternoon, more than 175,000 people indicated they would be “attending” the “public event.

Then the supreme court ruled this week that the inhumane overcrowding in California prisons means they need to let one third of the prison inmates back out onto the public. The conditions are so poor that inmates are getting sick and dying. I’m horrified by that as well. Now we have so many bad guys that we can’t contain them all anymore.

Is it that I’m just so disappointed in the human race? The answer to that is yes. And am I getting more afraid the end of the world really must be close? Yes again. Even so, there are still good people in our world that don’t disappoint.

Last week Elizabeth Smart faced her abductor in court during final sentencing. She quietly spoke her mind to him, with great grace and poise as he closed his eyes and infuriatingly sang hymns to block out the sound of her voice. I would have wanted to personally dive across that courtroom and scratch his eyes out.

But Elizabeth talked about the beautiful life that is before her, and that she knows in this life or in the next he will be held accountable for his actions. She showed not only her faith in God and in an afterlife, but her unimaginable sweetness. It came across when she said something that really stunned and stayed with me; “One of the biggest ways to overcome … to heal from any kind of experience is by helping those around you…. because by lifting others you lift yourself”.

I could not believe what I was hearing. I was so impressed by her as a human being. She counteracts so much of the selfish evil in our world that I have been seeing lately. She’s just one small but resolute voice.

“I don’t deny that was a part of my life. It certainly has brought me to where I am today. Without it I don’t think I would be here. But I have also seen how many doors have opened to me and how many opportunities have come … How much potential I have to make a difference in the world.”

So she started a foundation. She has a focus called RAD KIDS. She wants to help kids to be safe by training them what to do in dangerous situations.

We have RAD KIDS at our school.  My class was trained last year. It is an empowering program to teach kids to fight off strangers or any kind of aggression. “Nobody has the right to hurt you” is one of the mantras. The foundation she started has a goal to bring RAD KIDS training to every elementary school in the country.

The other thing that happened this week was Oprah closing her show. She is just another example of how one faithful and directed  voice can change the world.  (See my last post)  I have her high on a pedestal. These 2 fine examples of humanity counteract the evil I’ve seen this week. It’s the power of one in great and graceful display.  Evil versus good. We turn to look because the bright light of goodness draws us in.

It may be getting closer to the end of the world.  All these examples are telling me it is so. And it’s getting harder to live in this world, but I can still see the light and the good. And the stark black of evil and the pure white of goodness  around us, makes it clearer which path to follow.