Fall Books We have Read This Fall! :

Fall is Here by Pamela Jane

When Autumn Comes by Robert Maas

Nuts to You! By Lois Ehlert

A Season for All Trees by Robin Bernard

Apple and Pumpkins by Anne Rockwell

The Pumpkin Book by Gail Gibbons

Too Many Pumpkins by Linda White

I like to take a few days and talk and write about the seasons….just before they are going to change… So last week we made these GINORMOUS Scarecrows! And we did some AUTUMN Acrostic Poems. This week we are just about seeing the end of fall and the beginning of the winter season.

Here are some books, and poems that I share with my class.  And we sing a few of the songs too.

Here are my students getting into their scarecrows!

Five crows all shiny black,
Sat on a scarecrow’s back
Eating some most delicious corn.
Yum, yum!
Scarecrow winked and shouted, “Boo!”
Scared a crow and away he flew
Now there are four black shiny crows.
Caw, caw!

*Repeat verse until no crows are left.

And here are a few of our AUTUMN ACROSTIC POEMS.
We always start with a sloppy copy, then they get edited by me, then they rewrite onto some nice paper…then last is color the illustrations.

It is hard for me to see my favorite season go by the wayside. I love FALL so much. And I am not ever ready for a Utah winter. But alas, the seasons change. So I guess I will welcome winter anyway!  And I’ll look forward to skiing on my new skis!  Woo Hoo!

Last week just before the Thanksgiving Break we finished our Native Americans. We had studied about the Woampanoag Indians and Squanto and Samoset, who helped the Pilgrims who came over on the Mayflower assimilate into the New World.

We decided we probably didn’t want to be a pilgrim OR an indian child. They worked too hard!!! 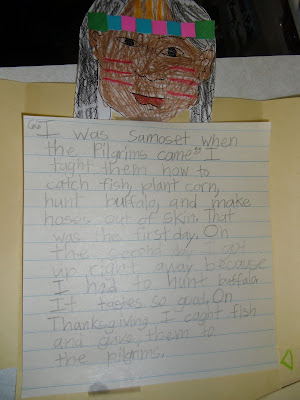 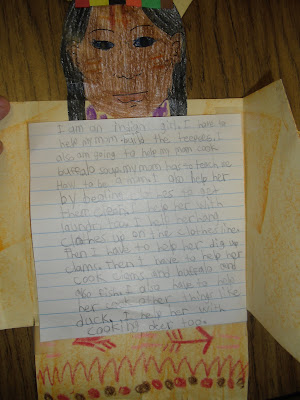 Here are our Native American people. We wrote little introductions telling about ourselves as if we were living as an Indian during the time of the First Thanksgiving.

We also read Pilgrim Play about Squanto and some Weekly Readers and Scholastic News stories about the First Thanksgiving.  Now we are winding down November and looking forward to December! I can’t believe how this year has flown by already!

HAPPY THANKSGIVING EVERYBODY!!! HERE ARE SOME THING 2ND GRADERS ARE VERY THANKFUL FOR THIS HOLIDAY SEASON…..

We made EASY turkey feathers from strips of butcher paper in 9 colors..

Well, it will be very nice to spend a few days off with my family and my kids and grandkids. Happy Thanksgiving BREAK! I’ll be busy making pies and homemade rolls. Check out my Thanksgiving recipes at my other blog Weekday Chef! In the meantime, enjoy those Take Home Reading Backpacks!

This week is Veterans Day. We will celebrate the day by honoring soldiers who have died in the line of duty, protecting Americans in the U.S.A.  I will teach the kids all 5 branches of the military; Army, Air Force, Coast Guard, Navy, Marines. We will also share that they all have their own song (with lyrics) and their own cool uniforms. We listened to them and watched them march out with the flag on utube.

Then we wrote  about what Veterans Day is For. We wrote about soldiers who are always protecting America around the world. I want the students to really remember how each branch of the military protects us in different ways; the Air Force with planes and helicopters, the Navy with ships and aircraft carriers and submarines, the Coast Guard with boats and divers,  and the Army and Marines on the front lines of battle. We will talk about the elite Navy Seals and Special Forces and how tough and brave they are.

After writing, as a fast finisher, kids will do a Veterans Day crossword puzzle.  We will discuss some of the vocabulary in the puzzle too.  The link is at homeschooling for Veterans Day Crossword.

Then I found a few neat handprint art projects I wanted  to try. Both look very patriotic! Also I found a fun wordsearch for fast finishers I will put on the back of the crossword puzzle. It is HERE at Family Fun Shop.

http://homeschooling.about.com/od/holidays/ss/veteranprint_3.htm   I also found a neat way to make free WRITING stationery.  I put an eagle and stars on the borders to make a cute page for our writing project.  Make your own stationery is found here at DLTK Kids. Just look on the left side for Veterans Day.

This kit for a Handprint Eagle is HERE at Oriental Trading. We didn’t do this one, but it’s really cute too.

Lastly I will show the kids a video song from Tim McGraw honoring fallen soldiers in the line of duty called “If You’re Reading This”.  It shows my students the sad part of the job of protecting people, and how some give the ultimate sacrifice, their lives in defense of America. That’s why we honor them at Veteran’s Day.

After watching the Utube videos we talked about what a Veteran is. We talked about how they protect the president, bridges, dams, airports and tall buildings as well as doing Toys for Tots at Christmas, marching in parades, flying on helicopters, jets, and manning boats, aircraft carriers and submarines. Most of the kids had gone to air shows and seen the military tanks, weapons and men there. We talked about places where there is war in the world and how our military helps protect us overseas.

While the kids started their writing I helped 2 at a time handprint paint. First we painted our left hand brown with a blue thumb. Then we painted our right hand brown with a red thumb, washing hands in between these steps. The prints overlap in the middle a bit. Then we painted our pointer finger white and did the middle tail feather. While they washed hands, I glittered with red, then blue glitter, then the white feather with gold glitter. Then the kids painted a head and beak after I lightly traced the shape with pencil on each bird. Lastly we added a wiggly eye with glue and 2 stars. They turned out great. 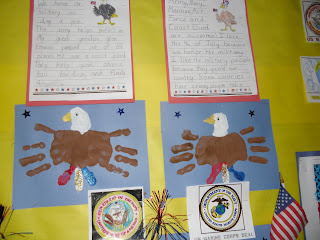 I told the kids about my dad, Mr. Russell, who was a marine in 2 wars. He is burried in a military cemetery in Southern California. He was a great soldier and marine for the U.S.A. I’m very proud of him.

I told the kids about my kids’ other grandpa, Mr. Moss’s dad, and how he was a flying navigator in the U.S. Air Force. He flew bombing missions in several wars.  He is still alive and retired. I will also share a picture of my nephew Garrett, who was in the army and shares my birthday with me.

I always send home a note asking for military memorabilia or a grandpa or dad or mom who wants to come and share with us. I was surprised how many of them had grandparents and dads in the military. They sent all kinds of things for us to share; dog tags, helmets, army blankets, aircraft jumpsuits, cloth maps for directions on the ground, photographs of men in uniform, lots of military memorabilia. It was very patriotic to me.

HERE at Military Coloring Pages  I found the neatest pictures of the 5 military branches’ seals in blackline master and some other cool coloring pages. I copied them, and then put 2 on a page and copied each of the 5 seals (Army, Navy, Air Force, Coast Guard and Marines) for the kids to choose one and color as a fast finisher during our writing time.

I’m very proud to be the daughter of an American Veteran. He’s gone now and I miss him. But I honor him and all who served and still sacrifice for me and my family this very special Veterans Day 11-11-11. Thanks for sharing all your military memorabilia and precious photographs of men and women in uniform. Happy Veterans Day from our class to you!

We had a fun time.  Thanks to Mrs. Kenner, Mrs. Neibaur and her sister, and Mrs. Carr for helping us at our party! You ROCK! And thanks to Jamie Sandstrom and Mrs. Kim for sending some cute Halloween cookies, and to all the parents who sent bags of candy! Thanks sooooo much for supporting our party!

And if you want to see a cute utube of me and my family doing the “Thriller Park City” flash mob, check out my personal blog post from Saturday night.  It was super fun!  Click HERE.    Happy Halloween!