HERE is a great link from Learning to Give with multiple lessons plans using The Seven Chinese Brothers. There’s a section where they created banners depicting each of the 7 brothers and their talents.  I found a cute video on how to make the Chinese “Paddy” hats they wear in the rice paddies and in the story. I’d like to make hats and list acts of kindness you could do for others in a spiral inside each hat.

How to make a Chinese “Rice Paddy” Hat…..

So for CHINESE NEW YEAR this year we had many wonderful activities. I think it is important to read multicultural stories of the many cultures represented in your classrooms each year. I have Asian students and so I like to teach the other kids about how Chinese New Year is celebrated in the Asian parts of the world. 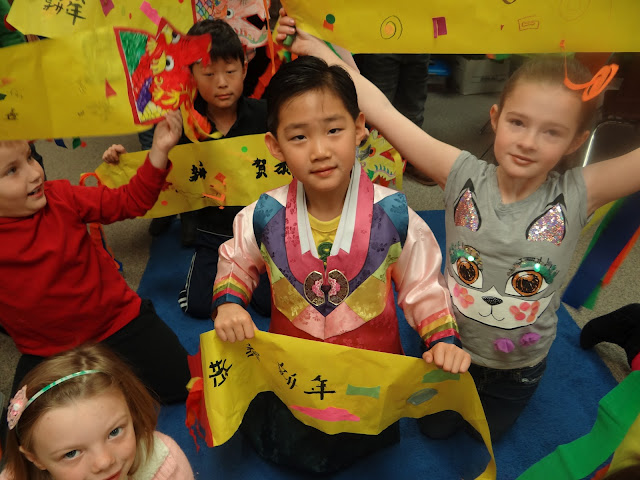 Here are some of my students showing off their artistic dragons. Peter’s wearing traditional Korean clothes.

This is a VERY cute story we read about Sam who gets Chinese New Year Lucky Money to spend on anything he wants. In the end he buys socks for a homeless man who he sees on the streets of the dragon parade so he can keep warm. Very touching story! Check it out above (Sam and the Lucky Money).

We started with a   MAKING WORDS activity using THE YEAR OF THE DRAGON to try and make as many words as possible. I set the timer for 3 minutes and the kids came up with as many as 32 words in that time. It was a lot of fun to see them get into the competition!  Then we looked at a Chinese Calendar (the animal calendar in the round) and figured out what year we were each born.
THE YEAR OF THE DRAGON!
Then we Read some fun literature. The first one we read as a play while I put up the book pictures on the document camera. I just typed up the text of the book and had 4 narrators (each table became a narrator) and the 7 brothers, the Emperor and the Guards. I must say Allie and Emma had the most memorable expression as they acted out their parts!

Another Book we read to Celebrate Chinese New Year is Sam and the Lucky Money.  A fun lesson plan to use with the great book about giving to those less fortunate than you is HERE.

For Chinese New Year we made DRAGONS to use in our first and second grade parade around the school.  We bring small gongs, cymbols, and drums and sing a song while carrying around these awesome dragons we created. HERE at Craft Jr.  is a link to a dragon puppet on chopsticks that is very pretty.

HERE is the Learning to GIVE link was a list of activities that I really loved too. Here was one I might have to use next week as we get ready for Valentines Day.
“Get out a giant piece of paper and, as a family, make the longest list you can of small ways to say “I like you” to family and friends. Here are some ideas to get you started: bring someone a cookie, rub Mom’s back, offer to weed your grandma’s garden, sweep the floor, bring Dad a drink of water, offer to play your sister’s favorite game, smile at your brother, etc.”
GUNG HAY FAT CHOY!